Thank you for visiting our new website! Please let us know what you like and how we can improve by completing the feedback form.

Liberation of the Netherlands

The “Hunger Winter” of 1944-1945 was devastating for the people of the Netherlands. Germany had occupied their country since 1940. Food supplies were exhausted and many Dutch resorted to eating tulip bulbs just to survive. Fuel had run out and transportation was almost non-existent. Tragically, thousands of Dutch civilians perished.

Then came the Canadians.

In early April 1945, the First Canadian Army began to clear the Germans from the northeast portions of the Netherlands. Often aided by information provided by Dutch resistance fighters, Canadian troops advanced rapidly, recapturing communities, canals and farmland as they relentlessly pushed forward. By the middle of the month, British and Canadian forces had cleared the city of Arnhem after two days of house-by-house fighting. Only days later, they also freed Apeldoorn. They continued their advance up through places like Zwolle and Groningen towards the North Sea. The Canadians kept up the pressure, putting their lives on the line even though it was evident that the rapidly weakening enemy forces would soon have to surrender anyway. It was felt, however, that the long-suffering Dutch simply could wait for relief no longer. Canadians tried to be judicious with their use of destructive artillery fire and aerial bombing, as they didn’t want to badly damage the country’s infrastructure and make it even harder for the local people to rebuild their lives after the war. (Information courtesy Veterans Affairs Canada).

Ecstatic Dutch men, women and children cheered Canadian troops as one town after another was liberated. Recalled one person who was a teenager at the time, “As the (Canadian) tank came nearer...there was a big hush over all the people, and it was suddenly broken by a big scream, as if it was out of the earth. And the people climbed on the tank...and they were crying. And we were running with the tanks and the jeeps all the way into the city.”

The fighting in the Netherlands was often bitter but ultimately Canadian service members were able to liberate the Dutch people and help end the Second World War in Europe. Numerous Okotoks soldiers participated in the liberation of the Netherlands, as members of the Calgary Tanks, Lord Strathcona’s Horse and Princess Patricia’s Canadian Light Infantry. This great victory, however, came at a terrible cost. More than 7,600 Canadians died, including two Okotoks soldiers, Harvey Gordanier and James Prosser Rowles. Both are buried in the Groesbeek Canadian War Cemetery in Gelderland, the Netherlands. Read their stories in the “Supreme Sacrifices” section of this virtual exhibit.
German forces in the Netherlands surrendered on May 5, 1945, ending five years of occupation. All German forces on the European continent unconditionally surrendered on May 7, 1945 and the next day, May 8, was officially declared Victory in Europe (V-E) Day.

Seventy-five years later, the bond between Canada and the Netherlands remains strong. Every year, the Netherlands sends tulips to Canada to bloom in the spring. And in the Netherlands, Dutch children carefully tend to the graves of the fallen Canadians.

In the fall of 2019, the Town of Okotoks received 750 orange tulips from the Netherlands. Many of these were made available to Okotoks residents for personal use, however, several were planted along Veterans Way, opposite the Salute to Our Veterans Wall. They will bloom this spring to celebrate the 75th anniversary of the liberation of the Netherlands.

Among the guests in attendance for the planting were the daughter, granddaughter and great grandson of Hank Moes. Hank was 13 years old living in the Netherlands when Canadian troops liberated his city. “As Dutch descendants and Canadians we are proud to plant a tulip to commemorate the liberation of Holland,” said granddaughter Sierra Havinga who was joined by her mom Grace and nephew Wolfgang in planting tulips in memory of her late grandfather. 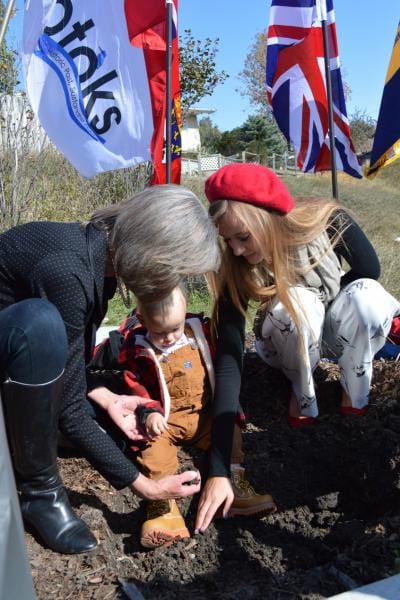 Grace, Wolfgang and Sierra Havinga of Okotoks plant tulips opposite the Salute to Our Veterans Wall in Okotoks, Oct, 3, 2019. Grace’s father Hank Moes was living in the Netherlands when Allies liberated his town. Photo: Okotoks Museum and Archives. 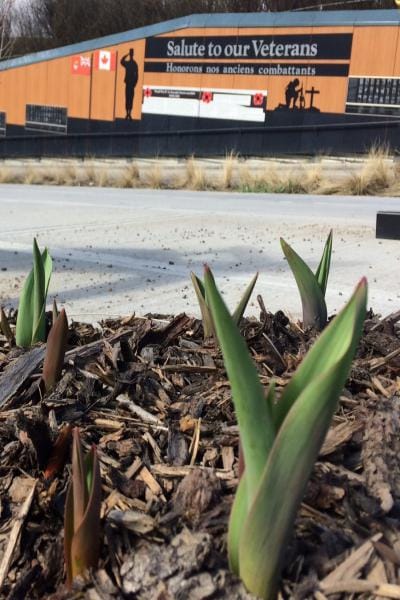 Tulips emerge from the flowerbed opposite the Salute to Our Veterans Wall, May 1, 2020. Photo: Okotoks Museum and Archives.